Reshma Pathan gets ‘Woman behind the scene’

Mumbai. Population First, in collaboration with UNFPA, have announced the winners of the 10th edition

of the National Laadli Media and Advertising Awards for Gender Sensitivity 2020. The award event will be held online on Tuesday, 15th December, 2020 4.30 PM onwards, on the youtube channel of Population First www.youtube.com/user/LaadliWest

Noted music composer Usha Khanna will be presented the Lifetime Achievement Award for her melodious contribution to Hindi films, and succeeding in a field that was almost reserved for men till she entered it. 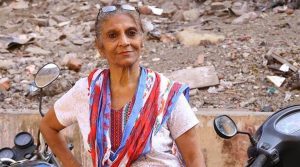 The other winners are
Books
Close to the Bone: A Memoir
Category: Autobiography
Author: Lisa Ray
Publishers: HarperCollins

In her autobiography, Lisa Ray examines so many different perspectives of her own life, her incredible journey of courage, of growth, of hope, of love and spirituality in the face of loss and adversity, the way she has conquered the odds, from misogyny to cancer. The way she looks at what it means to be a woman striving for more in today’s world, not just through her own story but also the stories of so many other women.

Lisa Ray is an internationally acclaimed actress, public speaker and writer. Raised in Canada by an Indian father and Polish mother, Lisa began modelling at sixteen and went on to become one of India’s most successful and memorable cover models. In a career spanning three decades and many continents, she has starred in several prestigious acting projects, including Canada’s Oscar-nominated film, Water. When diagnosed with a rare blood cancer in 2009, Lisa chose to share her experiences in a blog called ‘The Yellow Diaries’, which led to her memoir, Close to the Bone: A Memoir.

Manreet Sodhi Someshwar is a wonderful storyteller. Sensitively and skilfully, she weaves diverse threads of narratives – across years, countries, continents, giving voice to the women whose stories most often remain silent, or who are forcefully silenced – in particular those women who went through unbelievable horrors during the Partition and again during the Sikh riots.

Their silences just as much as their stories that the author unfolds for us, are lessons about the real human cost of war – and of that capacity to ‘other’ a previously familiar group, that shocks us in its seeming suddenness. History is so much his-story, and it leaves much out. The author fills those often deliberate gaps with what we now call her-story.

Manreet Sodhi Someshwar is an award-winning and bestselling writer of five books, including the Mehrunisa series and the critically-acclaimed The Long Walk Home and The Radiance of a Thousand Suns. Hailed as ‘a star on the literary horizon’ by Khushwant Singh and garnering endorsements from Gulzar for two of her books, Manreet and her work have featured at literary festivals in Singapore, Shanghai, Hong Kong, India and NYC. Her articles have appeared in The New York Times, the South China Morning Post and several Indian publications. Manreet lives in New York with her husband, daughter, and cat.

Free Hit is a wonderfully crafted book tracing the growth of women’s cricket in India. It is very well researched, and captures the pathos, the years of frustrations and haplessness of women cricketers in India for several decades, before reaching the acceptance from the country’s cricket administration and now increasingly even fans. Suprita Das has a sense of history, an eye for details and skills with language that good journalists must have. The book is very well crafted and doesn’t let the reader’s attention flag, even if cricket is not your sport.

Suprita Das is a journalist with NDTV, where she has been reporting and writing on sport for over a decade. She has covered two editions of the Olympic Games, Commonwealth Games and Asian Games so far, apart from several other national and international tournaments. She won the RedInk Award for Excellence in Journalism in 2015. Shadow Fighter is her first book.

Eve Ensler’s ‘The Vagina Monologues’ is a revolutionary play which continues to empower women around the world by normalising their body, by giving them agency, by speaking out about insecurities and injustices which they might not dare voice in real life. Having performed over 1000 shows in 17 years, actor and director Mahabanoo Mody-Kotwal’s Poor Box Productions has played an important role in making the play accessible to Indian audiences.

Founded in 1992 by Manjul Bhardwaj and likeminded people, the Experimental Theatre Foundation practices the philosophy – Theatre of relevance. The organisation started performing on street corners, and have gone to the remotest corners of India. It has performed more than 25 plays on social issues like oppression of women, child sexual abuse, child labour, etc.

Bombay Rose is a 2019 Indian animated film written, edited, designed and directed by Gitanjali Rao. The film had its world premiere at International Critics Week at the 2019 Venice Film Festival. It was screened in the Contemporary World Cinema section at the 2019 Toronto International Film Festival. The film tells us a tender love story involving a Muslim man and a Hindu flower seller girl. It subtly presents a young man redefining his own masculinity and patriarchy. It also has a same sex love story woven in to it. It is made by frame-by-frame painted animation on the computer and took 18 months with 60 artists to complete. The film will release on Netflix on 4 December 2020.

The documentary ‘Holy Rights’ follows the journey of Safia Akhtar, a deeply religious Muslim woman from Bhopal, Madhya Pradesh who joins a programme that trains women as qazis (Muslim clerics who interpret and administer the personal law), a traditionally male preserve. The film documents her journey as she negotiates an uncharted territory, exploring the tensions that arise when women try to change the status quo and take control of narratives that so deeply affect their lives.

Made in heaven – web series

‘Made in Heaven’ is a 2019 Indian drama web television series that premiered on Amazon Video on 8 March 2019. Produced by Excel Entertainment, the series chronicles the lives of Tara and Karan, two wedding planners in Delhi running an agency named Made in Heaven. The series deftly presents a social commentary on Indian marriages which are often arrangements of convenience and expedience – with business and financial interests often influencing the decisions.

Soni is a 2018 Hindi crime drama film directed by Ivan Ayr. Produced by Kimsi Singh and Kartikeya Narayan Singh, the film stars Geetika Vidya Ohlyan and Saloni Batra in the lead roles. It was written by Ayr and Kislay and chronicles the life of police officer Soni (Ohlyan) and her superintendent in Delhi Police Kalpana (Batra), who deal with crimes against women in the city.

The first runner up – BBDO – for category TV Ad product for #ShareTheLoad “Are we teaching our sons what we have been teaching our daughters?” – Ariel.

We are happy to introduce a new category of award this year. That is for ‘the most inspiring woman protagonist in a TV serial’. This award goes to the character of Mini, essayed by Ashnoor Kaur, in Patiala Babes, the TV show on Sony TV. Mini not only takes a stand against injustice and violence but also stands by the victim, her mother, to help her pick up the pieces and start her life afresh.