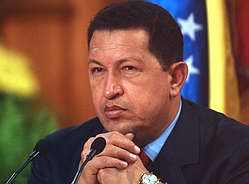 “Those who die for life, can’t be called dead.” Comrade Maduro on the death of President Hugo Chavez.

The true homage to revolutionaries can not be paid only through the words but by carrying forward the revolutionary tasks left behind.
Progressive Writers’ Association (PWA), Madhya Pradesh Branch pays its tribute to Venezuelan President Hugo Chavez and conveys its deep condolences to the revolutionary people of Venezuela and the heirs of Bolivarian revolution. We express our full confidence and solidarity in the wisdom and strength of Venezuelan people and their leaders, which they have earned after consistent struggles. People of Venezuela, of Hugo Chavez’s country will carry forward the revolution.
After coming to the power in 1998, President Chavez understood it soon that power is for nothing but for the people. With the help of the revolutionary people of Venezuela and other like minded leaders like Fidel and others, Venezuelan President Hugo Chavez brought Socialism of 21st century n political agenda in Latin America and left forces all over the world. He was doing this in such a determined manner that imperialist US soon started finding the presence of Venezuela unbearable. The US with the help of capitalist mainstream media tried everything to give Chavez a bad name and to denounce the Bolivarian revolution, but people of the world have been wise enough to make a distinction between the friends and the enemies. Chavez used every opportunity to expose the anti humanity character of imperialist forces and laid down the concrete road to bring about a real change internationally as well as within the nation. It attracted the attention of entire globe and made solid ties with Cuba and other anti imperialist countries. Creation of Latin America’s bank ALBA (Bolivarian Alternative), nationalising oil industry, making available good health and education services to the remotest parts of the country and extending the helping hand to those other countries who wanted to get out of the exploitative claws of US and other imperialist countries, he was able to erect a joint force of people across the borders. No wonder that in no time, along with Fidel, his name was taken as a charismatic leader and a legend. Venezuela became the symbol of 21st century Socialism in less than two decades. His untimely demise is very sad and  a great loss to not only Venezuela, not only to Latin America, but to entire humanity which was finding more respectful and honorable place in Venezuela during his regime.

His visit to India in 2005 depicted the Indian peoples’ love towards him. He was a very popular and vibrant leader who interacted with Indian youth and answered their questions. He did not succumb to the pressure of capitalist bloc, neither to to the cancer.  MP PWA passed two resolutions- one was to free five Cuban five from US prison and another was for the good health of President Chavez, in its recently held Sagar Conference. This was in itself a proof of love and respect towards revolutionary people living on the other side of the globe and to the land of great poet Jose Marti.
Hugo Chavez was a fighter and he fought bravely in order to advance the Socialism. His memories will continue inspiring people to fight for the right, justice, equality and Socialism.
Long live Chavez, Long live Bolivarian victory.

We pay our red salute to him.