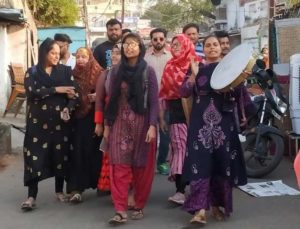 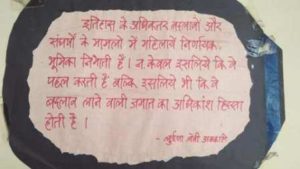 April 2020 is fast approaching and anti-CAA protesters are gearing up for intensifying their grassroots campaign, in an attempt to educate, inform people about the impending NPR exercise roll-out. While the Iqbal Maidaan Satyagrah runs well over 50 days reaching out to over 1000 people each day, its still not enough to address the largely un-reached population in the city. The Satyagrah has triggered similar protests in other districts in MP, and the pattern is more or less similar – of people staging a sit-in dharna either for some hours or 24 x 7. The satyagraha has seen its share of ups and downs – however the show goes on irrespective of differences. In the last week, the group has intensified its feild outreach moving towards ‘mixed’ bastis and colonies, which primarily means reaching out the non-Muslims in the city. So far, the protest in Bhopal has been limited to old city community and groups.

Spearleading this process are dynamic women leaders – Zama, Arshi, Iqra, Nighat, Amreen, Samreen, Tabassum and many others like them actively supported by their male friends – Lobzang, Abdulla, Sachin, Vijay, Danish, Saif, Nadeem and others. They have been campaigning in the Roshanpura area and have met with a few challenges including vehement BJP supporters who besides being blindly loyal to their party leadership are totally clueless about CAA, NPR and NRC related issues.

In such situations, the women have staunchly maintained their composure and refused to get upset by the communal comments hurled at them – since most of them are Muslim women. They also advise the community to take a stand only once they have understood the issue well. It is this stance that has won over many in the bastis, especially women who have a felt need for information. The campaigners carry out a rally in the basti with slogans, nukkad speeches in various spots and finally gather a group of volunteers from the community who work towards organizing a larger gathering in a day or two. Apart from informing the community, it also helps build a cadre of volunteers who want to participate in the campaign.

Will this have a successful run? Will this tiny, but determined group of women led campaigners be stopped by communal forces? Will they reach enough numbers and is it even possible that a handful of people can bring about change…?

Samvidhan Live Team spent some time with the campaigners in the Roshanpura basti and what we witnessed was promising. Perhaps, the unraveling of a movement that is beyond CAA-NPR-NRC. A movement that bring together men and women from various backgrounds together into a Common Interest Group. A group that is determined to set the scales right.

More power to them!